In September Bitcoin Not Bombs launched a crowd-funding campaign to buy hoodies for the homeless. On Sunday, November 17th the first run will be distributed in San Francisco, CA.

(San Francisco, CA) – Bitcoin Not Bombs raised a total of 21 Bitcoin (currently valued around $6,000) for the first run through Bitcoin services like BitcoinStarter.com, CashIntoCoins.com, and general donations. The funds were used to purchase screen printed orange hoodies from Mass Appeal Inc. to be given to the homeless, to purchase socks and other items with excess funds, and to do a little guerrilla marketing for Bitcoin in a downtrodden demographic that could really benefit from this new technology.

This is an entirely Bitcoin funded project. The fundraising is being done in Bitcoin, and the hoodies are being purchased with Bitcoin. Bitcoin Not Bombs does not accept war dollars. There are currently three ways that people can support this campaign:

1) Pre-order a hoodie or t-shirt. Each Bitcoin Not Bombs hoodie and shirt is priced to cover the cost of one hoodie for someone in need this winter. The pre-orders will be printed after Cyber Monday, December 1st, 2013, and shipped in time for holiday gift giving.

2) Donate Bitcoin. All donations made to the Bitcoin Not Bombs general fund made during the course of this campaign will go toward this project.

3) CashIntoCoins.com allows users to buy Bitcoin by depositing war dollars at many popular banks and credit unions. Users can use the Bitcoin Not Bombs donation address to send Bitcoin to us, or donate part of the processing fee when they purchase their own Bitcoin.

About Bitcoin: Bitcoin is an alternative currency that can be transferred electronically anywhere in the world with no bank and no government forms. It’s cheaper than any other online payment system, and thousands of websites already accept it. The Bitcoin network uses state-of-the-art cryptography to provide superior privacy protection, making it difficult to confiscate by governments or other thieves, but accessible from any WiFi connection or mobile device.

Bitcoin does not discriminate. You can open a Bitcoin wallet without showing ID, or providing a physical address. Unlike traditional banks, Bitcoin is accessible to the undocumented, and the homeless, giving the unbanked a means of savings, and access to a vibrant global market.

Bitcoin is not tied to any central bank, so it is not subject to dollar inflation, which is at the root of systemic poverty and homelessness in any otherwise wealthy economy. The global dollar hegemony now has serious competition, giving us an easy exit off the dollar’s road to worthlessness.

Project Feed: Project FEED began four years ago as a small group of dedicated students who passed out peanut butter and jelly sandwiches to the homeless. Today there are several dozen volunteers who meet once a month to assemble brown bag lunches in an assembly line to distribute on the streets of the Tenderloin, known for its squalor and homelessness.

About CashIntoCoins: Deposit war dollars at any Wells Fargo, Bank of America or a credit union with shared branches and get Bitcoin. You won’t need a bank account or a government ID, and you can donate part of the processing fee to charity.

About Mass Appeal Inc.: Mass Appeal Inc. was established in 1972 and offers thousands of custom printed promotional items from a wide variety of popular brands. In addition to screen printing they can provide services of embroidery, applique, rhinestones, puff printing and ad specialties. Mass Appeal Inc. proudly accepts Bitcoin as a payment method. 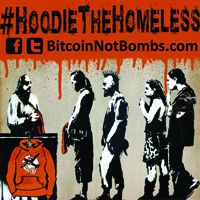