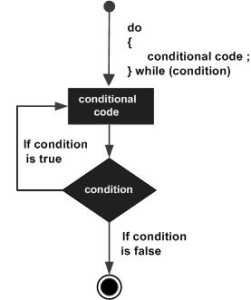 Breaking the Do-Loop
by Ben Stone

I have a repeating thought. It’s a question that pops into my head over and over every day. Each time I encounter one of the many failings of the State I can’t help but ask myself, “Why do people continue tolerating this?”
I know this is a common problem because I see someone asking this question on the internet almost every day. And the bad part for an anarchist is that the more we understand the true nature of the State, the more shortcomings we see and the more we ask that question. It’s a self-perpetuating do-loop.

I should explain what a do-loop is.
A do-loop is used in computer programming where you want a program or hardware to continue doing something over and over until a specific condition changes. So for example, security software that monitors motion in an empty room could tell a motion detector to send out a burst of microwaves. At that point an “if-then-else” construct either repeats the loop or sounds an alarm, according to the result of the construct.

In this example the do-loop would remain 123123123123123 etc until something comes into the field of observation in which case it would become 1234.
One thing a computer programmer has to watch for is a continuous do-loop. Due to an oversight or error, a program can get stuck in a do-loop with no way to get out. Not too many years ago this was a common cause of the famous Blue Screen of Death, which is becoming an endangered species with more advanced computers and better programming.

An example of a social version of the continuous do-loop is in the Prisoner’s Dilemma (PD) of game theory developed by the RAND Corporation. The PD goes like this:
The police have two people in custody for a crime but they lack evidence for a conviction of that crime. The police separate the two and make them each the same offer; Rat out your buddy, he will get a year in jail and you walk free. But if your buddy rats you out and you don’t rat him out, he walks and you get a year in jail. If you both rat each other out you will both get 3 months. If you both stay silent you will both be given 1 month on some trumped up lesser charge. The PD is used to justify the existence of the State because the way the theory plays out, the prisoners will always cut a deal and will always serve 3 months. They would be better to stay silent, but due to distrust and selfishness they both always rat out their buddy. If you play it out over and over the prisoners will always choose to rat each other out which is always the worst choice. According to the theory, this is the great flaw in human nature that would cause humans to be in a constant condition of all against all if not for the wonders of the State. The assumption being that without the State, people would always make harmful decisions based on distrust and the desire to get something at the expense of others. The State plays the part of an attorney who communicates to both prisoners providing a safe go-between that assures both prisoners that they will get away with it if they cooperate with each other. The geniuses at the RAND Corporation believed the State interrupts this do-loop in society by providing an opportunity for people to trust each other.

The problem with the PD is that it was engineered by its designers to provide the results they were looking for to begin with. In a way, that’s why the RAND Corporation exists. To justify governments and corporations and give them the answers they want to hear. You see, the PD assumes that the nature of humans is to distrust each other and try to get something at the expense of others, and in the carefully designed Statist world of the PD they are mostly right. The State itself not only creates distrust between people it also promotes the desire to get something at the expense of others. So when the folks at RAND designed the PD, they did so not to discover the nature of humans, but to show how humans can be forced to behave in a predictable manner and be forced to depend on the State for salvation.

Consider the PD from a liberty oriented point of view. A tyrant kidnaps two people and accuses them of a crime without supporting evidence. They are forcibly separated and held incommunicado, threatened with jail, and offered a bribe for betraying their friend. The PD causes the observer to assume guilt rather than assume innocence. Also it completely leaves out human factors like friendship, devotion, and fear of long term repercussion once the guy you ratted on gets out of jail and comes looking for you. So from a liberty point of view, it’s not a prisoner’s dilemma, it’s a kidnap victim’s dilemma. And finally, for the PD to work the prisoners cannot be followers of either the Golden Rule or the Zero Aggression Principle as either would prevent the kidnap victims from helping their kidnappers for the sole purpose of saving themselves.

When open testing of the PD took place it was defeated by the tit for tat strategy also called the equivalent retaliation strategy. The basic premise here is that in a real life situation the prisoners would know that if they rat out their friend he will retaliate, and they plan on retaliation if their friend rats on them. So for this reason they treat each other in the way they wish to be treated and they refuse to rat out their friend, thus breaking the PD do-loop. And every child knows and operates by the tit for tat strategy since it is human nature and based in the same primal urges that drive the Golden rule and the Zero Aggression Principle. Actually the tit for tat strategy is represented in the Zero Aggression Principle through the law of property rights and the right to defend one’s self and one’s property, violently if need be. Therefore even within the Statist framework of the PD, liberty prevails.

The PD scenario can only exist in a State dominated situation, so it doesn’t prove the need for the State, it shows that the only answer the State can ever offer is more dependence on the State. And the defeat of the PD with the tit for tat strategy shows that even when the State stacks the deck and controls the odds, the simple honesty of human nature and the power of the principles of liberty still overcome the lies, theft, and aggression of the State.

So then, why do people continue tolerating this silly fixed game?
I think Thomas Jefferson hit the nail on the head when he wrote the following:
Prudence, indeed, will dictate that governments long established should not be changed for light and transient causes; and accordingly all experience hath shown that mankind are more disposed to suffer, while evils are sufferable, than to right themselves by abolishing the forms to which they are accustomed. But when a long train of abuses and usurpations, pursuing invariably the same object evinces a design to reduce them under absolute despotism, it is their right, it is their duty, to throw off such government, and to provide new guards for their future security.

Jefferson was mostly right. His philosophic flaw was based on the fact that he failed to see the difference between a government and a State. We can throw off a government whenever we want, but the State will continue until humans see it for what it is. Once that happens we won’t have to throw it off. We will only have to simply stop supporting it and it will tumble to the ground like a great brazen idol with no legs.
(end do-loop go-to liberty)